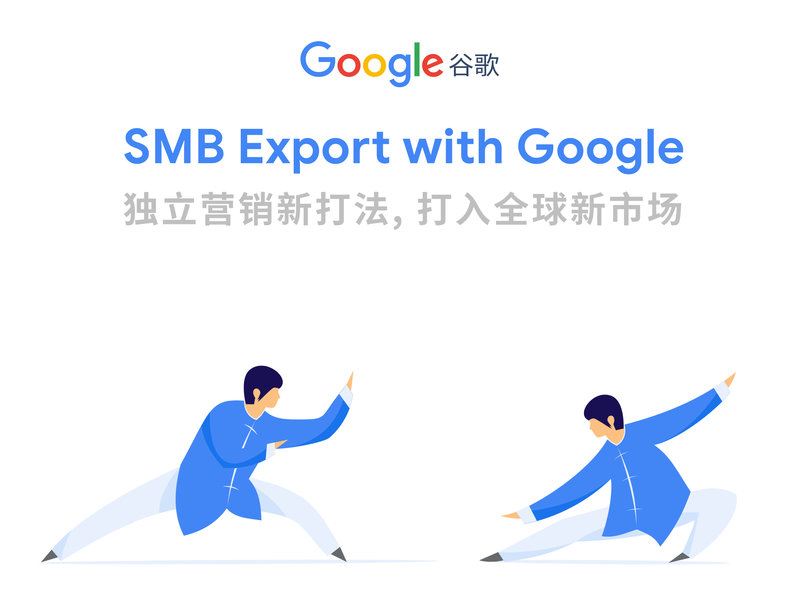 Since President Xi Jinping announced the ‘One Belt, One Road’ initiative, Chinese businesses have responded eagerly to the call for global expansion.

Whilst larger businesses in China have both the scale and the resources to help accelerate growth, Small/Medium sized Businesses (SMBs) lack the resources and tools but do share the ambition of succeeding outside of China. Therefore more often than not, SMBs stick to more familiar ways of selling products, relying on trade events, standardised platforms (e.g. Alibaba and Amazon), and direct marketing.

The campaign’s goal was to generate sign-ups to the Export with Google programme among Chinese SMB exporters, by driving subscription to Google’s B2B Wechat official account.

SMBs are run by small teams and the decision makers often juggle multiple roles – everything from operations to marketing. Although ambitious about seeing their business grow internationally, the focus on immediate ROIs makes them susceptible to the familiar off-the-shelf formats offered by trade platforms such as Alibaba, Amazon and even Facebook.

Although they may be aware of Google, they were unaware of Google’s products and how to engage with the brand. An additional challenge for Google was to help them understand the benefits of long term view vs the immediate ROI. The challenge was to make exporters overcome the inertia of sticking with the familiar solution provided by export platforms.

The Insight
Through customer research*, we learned that most SMB exporters were hard working traditionalists and not the visionary mavericks they wish to be. Though ambitious, they were not risk-takers and were reluctant to try an unfamiliar method of exporting.

The Approach
To encourage them to overcome their fear of the unfamiliar, we approached this B2B message through B2C methods, reaching exporters by speaking their language in familiar channels, to make our product benefits more easily understandable.

The Creative Concept
In local chat groups, Chinese exporters were always seeking out new “fighting strategies” to help their businesses win, so our core campaign idea (“独立站营销新打法”) borrows this familiar metaphor of “warfare” to frame the product as a new “fighting strategy”.

Our agile fighting strategy of pre-crafting messages with local insights also optimized our performance by reading media signals and switching out the copy with best click-through rates.

3X the average WeChat subscription rate
The campaign also generated over nearly 3x as many new subscribers to our WeChat official account during the campaign period, as compared to the average rate during campaign-free periods.

Approaching B2B with B2C tactics
Using familiar language in familiar channels, we were able to help SMB exporters overcome their fear of the unfamiliar and drive interest and signup for Export with Google.

Using a dynamic creative approach
With media signals, combined with our agile approach in optimising messages and user experience led to better than average/historical results.

Powering Chinese SMBs’ global ambitions through raising awareness and subscription to Export with Google Program
More importantly, by broadening the awareness of Export with Google, as well as driving program sign-ups,we were able to bring Chinese SMBs closer to achieving their global ambitions by escaping the familiar commodities markets of trade platforms, and start building their own brands. 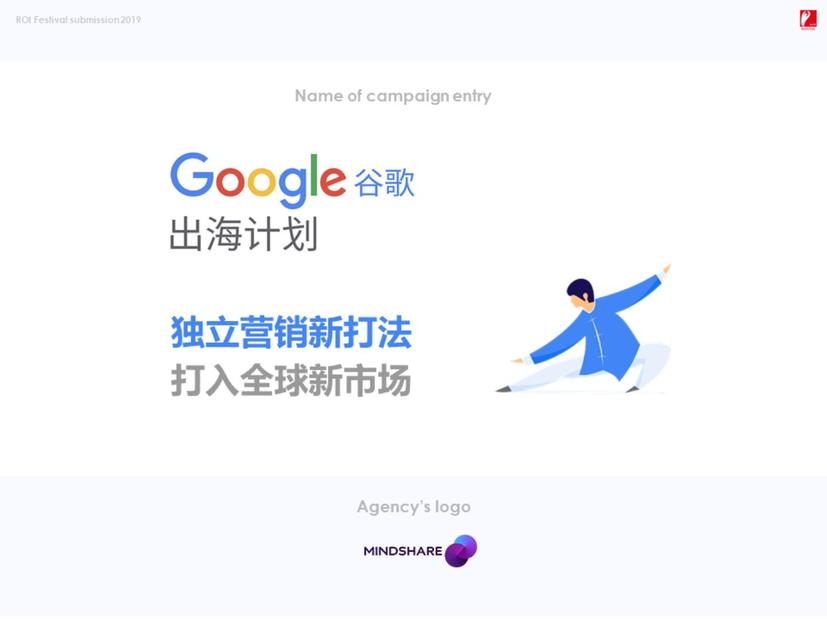 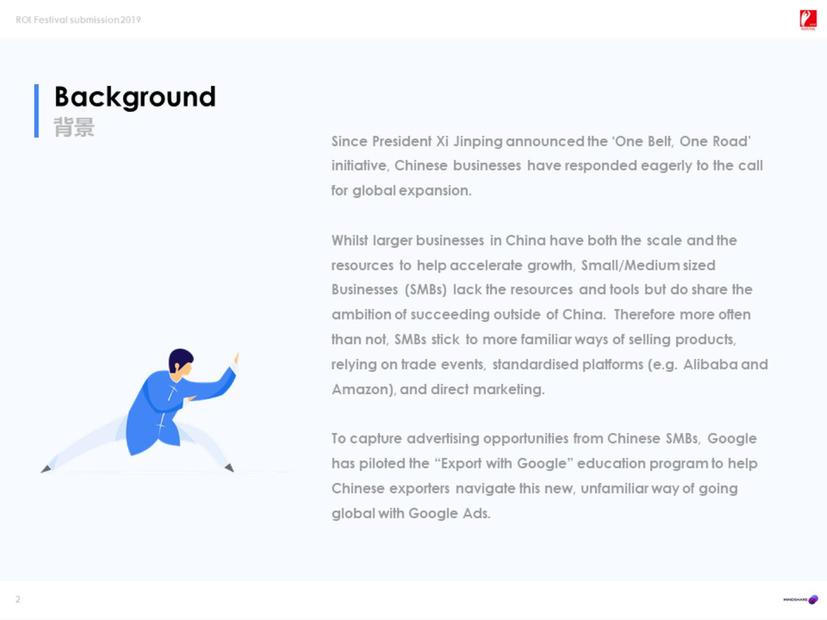 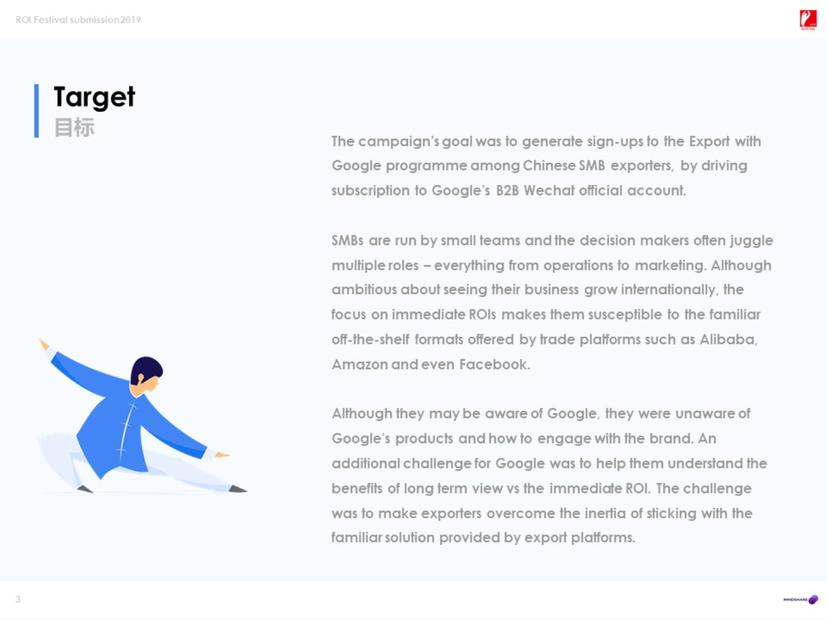 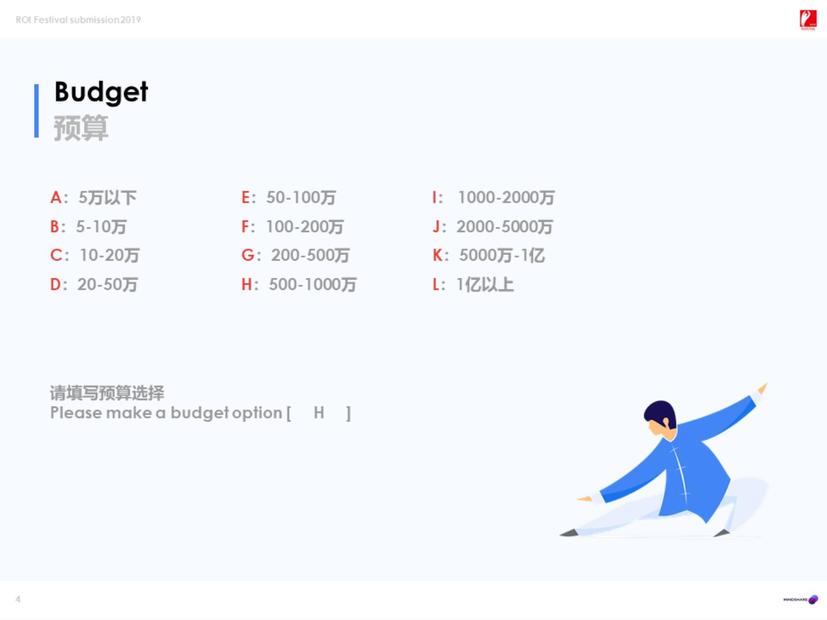 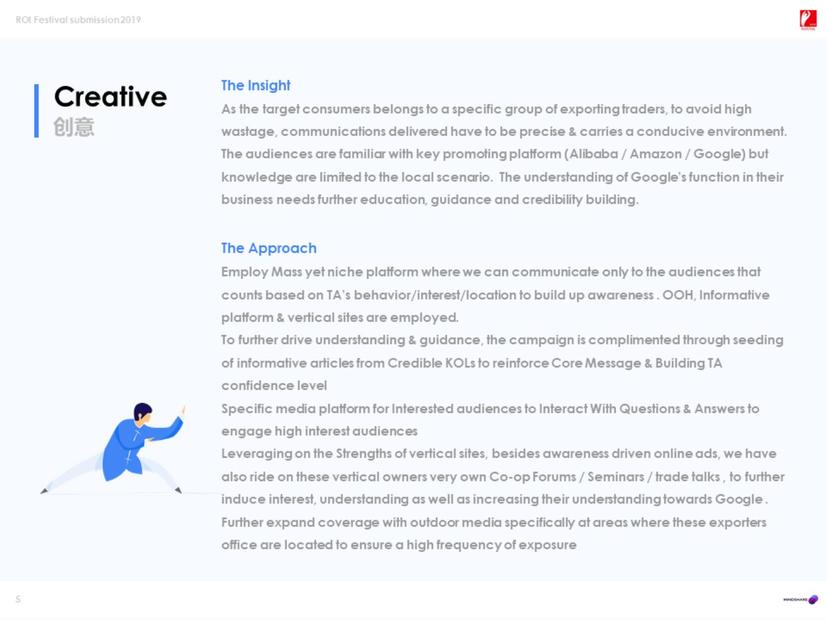 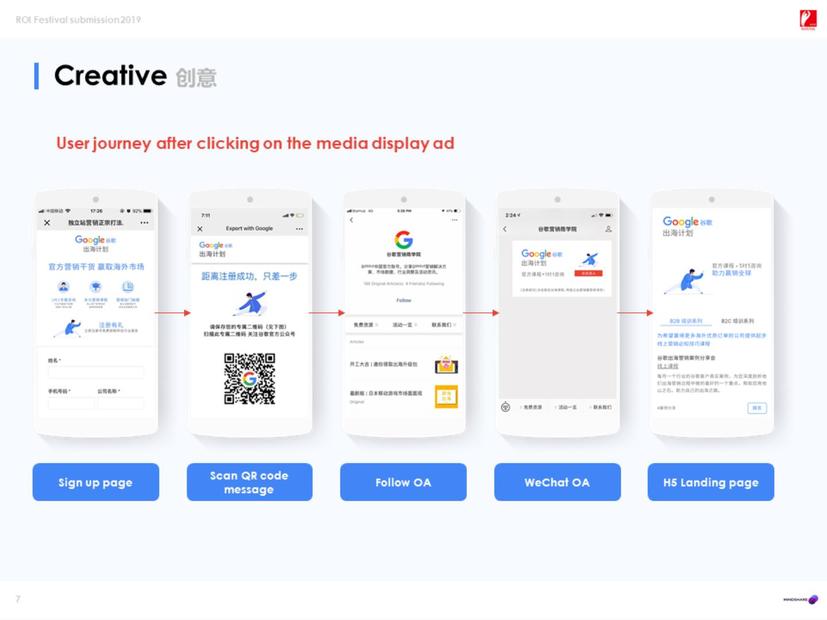 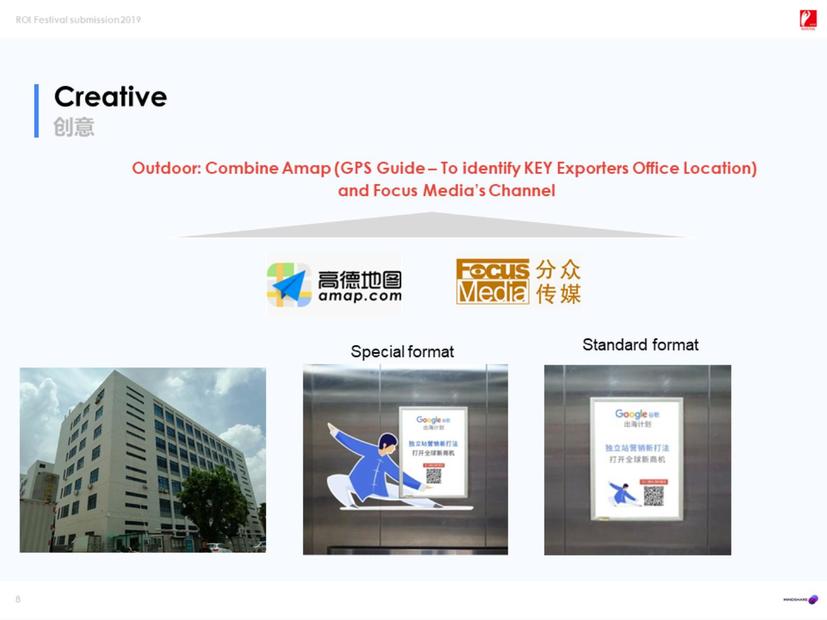 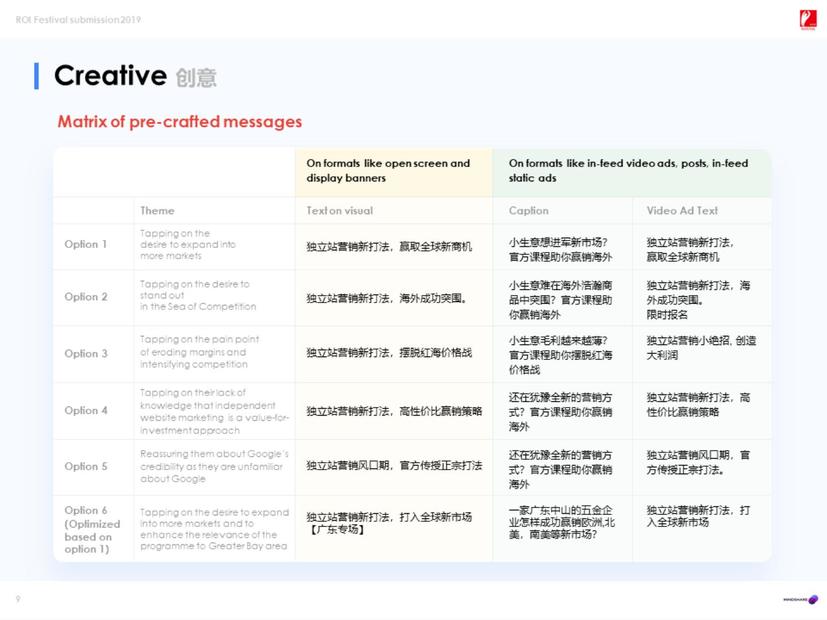 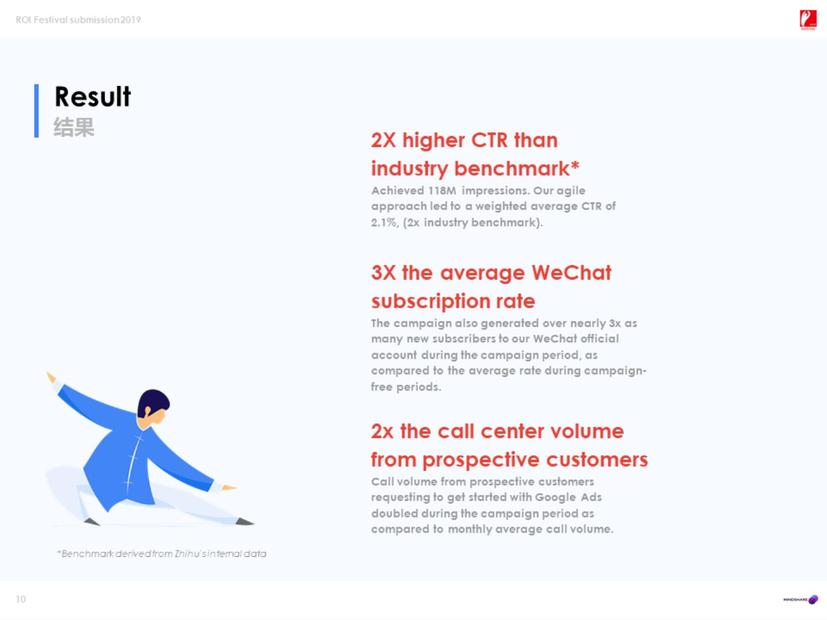 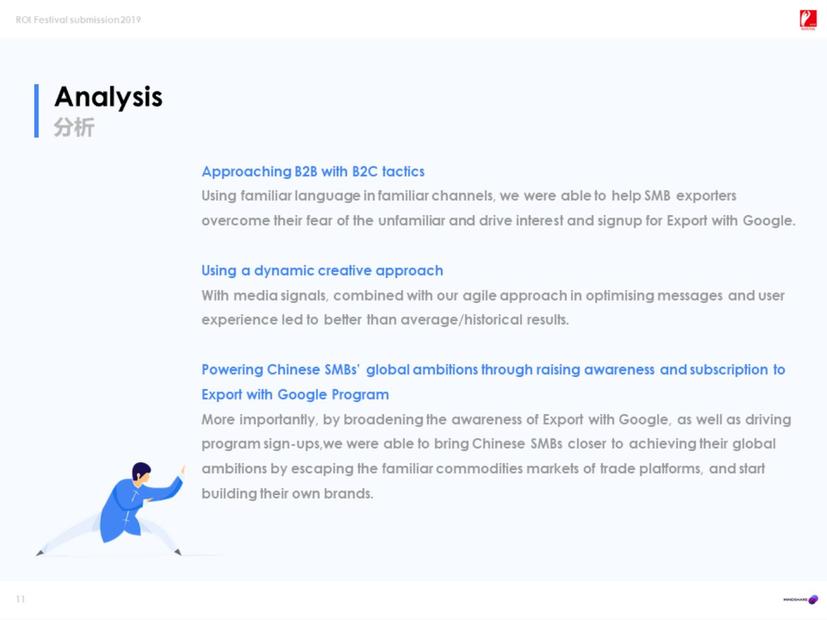